“No. I don't care who wins or loses. What matters is how I feel.”
- Suzuki to Yoshio Hosokawa

Ryoji Suzuki (鈴木 涼二, Suzuki Ryoji) is the boyfriend of Chiharu Tanaka and a close friend of Atsushi Ōtani. He is a support character in the original manga, anime, movie, and video game.

Much like Chiharu Tanaka, Suzuki is a very brilliant, calm, collected, shy, and easily embarrassed boy by the thought of romance. Though he isn't very talkative, Suzuki can often be mistaken as intimidating and standoffish due to his "resting bitch face" which initially terrifies Chiharu. He struggles with his own feelings of worthlessness after failing his first choice universities entrance exams, and almost willingly hands Chiharu over to to someone else that he deems as more worthy of her love.

In both the anime and the manga, Suzuki with tall and learn with sandy blonde hair kept in a neat bob with left side-swept fringe and brown eyes. Outside of school, Suzuki can be seen in various outfits usually consisting of jeans, button-up shirts, and sweater vests.

Suzuki's uniform is a white short-sleeved dress shirt with a red star and tie, gray slacks, a black belt, and brown dress shoes. He wears the same uniform in the winter as he does in the summer, but with the addition of a peach button-up sweater that has a red star on the chest and two red stripes on the left arm. Suzuki is the most traditionally dressed of the male characters and does not wear any accessories with his school uniform in either summer nor winter.

Like his friends, Suzuki chooses not to wear his uniform to school unless absolutely necessary.

Chiharu is Suzuki's girlfriend who met during summer classes of their first year of high school and started dating shortly after. Their relationship throughout most of the series was fairly straight forward without any issues, that is until they took college entrance exams. Chiharu and Suzuki were taking exams for the same university, but unfortunately Suzuki fell ill the morning of the exam and ultimately failed. This caused strain between the two because Suzuki felt stupid due to their failings, completely disregarding that he actually failed because he was sick.

During this time, a fellow student named Yoshio Hosokawa confronted Suzuki claiming that that he (Suzuki) was not smart enough for Chiharu and therefore not worthy of her love. But because Yoshio had passed that universities entrance exams, this meant that he was worthy of Chiharu and demanded that Suzuki give her to him. Suzuki replied with a hushed, "I'll think about it," which greatly upsets Chiharu prompting her to angrily throw a desk at Suzuki. Suzuki, along with Ōtani, go to talk to Yoshio intending to calmly solve the issues but Ōtani's big mouth initiates a judo match instead.

Despite Suzuki's physical shortcomings, he still accepts the match and trains with Ōtani so he can at least put up a fight. Suzuki ultimately loses the judo match against the talented judo captain Yoshio, but Chiharu still chooses Suzuki - after all, Suzuki is who she wanted to be with in the first place. She tells Suzuki that she will put off school for another year until he can once again take the entrance exams and then they will continue going to school together.

Yoshio is a love rival of Suzuki's. He believes that Suzuki is weak and undeserving of Chiharu's love because he didn't make it into college. Although Yoshio is all about body-building and judo, he chose to quit doing those things in order to focus on studying so he could attend the same college as Chiharu. Rather than asking Chiharu out himself, he commands Suzuki to give Chiharu to him. Instead of fighting for her, Suzuki responds with, "I'll think about it."

Quickly changing his mind, Ōtani forces Suzuki to confront Yoshio which turns into him accepting a judo match. Suzuki swiftly gets taken out by Yoshio, but stands back up to try again. Risa quickly distracts Yoshio by pointing out that Chiharu was there and giving Suzuki the chance to take him down, which he successfully does. Suzuki declares that he won't give up Chiharu to anybody, promises Chiharu that he is not only going to study harder, but that he is going to build his own strength so he won't get sick as often.

He makes his first appearance in Chapter 47.

Ōtani and Suzuki became friends during summer school of their first year of high school - it is unknown if they were acquainted prior to this. Unbeknownst to Suzuki, Ōtani only became Suzuki's friend in hopes of using him as an exchange for Chiharu during his and Risa's love war. Despite that plan not working out, he and Suzuki remained friends.

Risa and Suzuki met during summer school of their first year of high school. Risa had immediately fell for Suzuki because he was not only cute and polite, but also taller than her and didn't make her feel uncomfortable because of her height. Risa initially tried to win Suzuki's love, but backed off after she found out that he and Chiharu liked each other. They remained friends anyway.

Nakao and Suzuki met during summer school of their first year of high school. They became friends through association when his friend Risa was pursuing Suzuki, and though they don't seem particularly close, they are still good friends.

Nobu and Suzuki met during summer school of their first year of high school. They started hanging out when Risa was pursuing Suzuki, but didn't really become friends until him and Chiharu started dating.

Suzuki's father is a kind and gentle man, often defending Suzuki when his mother comes down on him for being sickly. He praises his son for doing the best he can given the circumstances and takes the blame for his short-comings. He also appears to be a bit of an airhead and is often late for work.

He makes his only appearance in Chapter 47. 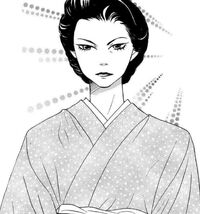 A traditional Japanese woman, Suzuki's mom dresses in a kimono with her dark hair done up in an icho-gaeshi style. She appears to be rather tall, standing only a bit shorter than Risa. She is ashamed of Suzuki's weak body and his inability to attend enough school to make good grades or get into a good university, while simultaneously being very proud of her daughters success. She claims that Suzuki's weakness is due to his father pampering him and that he's such an embarrassment that she can't even leave the house. Later that day, all of Suzuki's friends come to visit, and she tells Suzuki that Chiharu is probably only there to break up with "her pathetic nancy-boy ronin" of a boyfriend.

When Risa and Ōtani first meet her, she comes off of as a scary woman who makes them extremely nervous. They asked to use her spare room to practice judo, and though she is hesitant at first, Suzuki's sister convinces her otherwise. She follows up with slapping Suzuki on the back of the head, calling him hopelessly weak, and telling the duo not to go easy on him.

She makes her first appearance in Chapter 47. 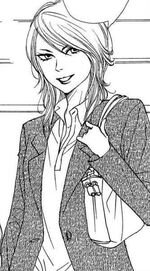 Yoshimi is Suzuki's older sister. Initially appearing as the perfect business woman, Yoshimi is quite brutal and bullies Suzuki. After Suzuki fails his college entrance exams due to being sick, Yoshimi gives him a dumbbell to work out with. He drops it on his foot due to it being too heavy, she smirks and walks away.

Yoshimi's a black belt in judo and takes the chance to show off her skills after convincing her mother to let Suzuki, Risa and Ōtani practice judo at their family home. Suzuki first introduces her as his sister to which she responds by saying, "You are to call me Yoshimi-sama!!" and takes him down with a Hiza Guruma technique. She screams, "NEXT", and Risa pushes Ōtani. She takes him down with a Tai Otoshi while screaming, "You'll never make section chief!" She continues on with the lesson while getting progressively more erratic.

She makes her first appearance in Chapter 47.

Movie
Add a photo to this gallery
Retrieved from "https://lovelycomplex.fandom.com/wiki/Ryoji_Suzuki?oldid=8722"
Community content is available under CC-BY-SA unless otherwise noted.