Kuniumi Maitake (舞竹 国海 Maitake Kuniumi) is the English teacher at Maido Academy and the cousin of Haruka Fukagawa. He is a support character in the original and sequel mangas, anime, and movie.

Maity is quite tall, standing at 186 cm and has a slim build. He is seen as extremely attractive, quickly gaining the favor of every girl in the class that he mentors (except for maybe Nobu and Chiharu). Risa fawns over him due to the extreme similarities between him and the game character Cain-sama.

His hair is black and is quite long, earning criticism from the male students in the class who says he looks like a foreigner.

Maity has a habit of looking a bit tussled, having his shirt unbuttoned a bit more than the average teacher as well as having quite long and messy hair, but he pulls it off due to his young age and charming personality.

The Maity Fan Club is a club at Maido Academy that is dedicated to Maity, he also serves as the administrative advisor for the club. The club was originally formed by Risa Koizumi when Maity first joined the school due to his similarity to Cain-sama. The Maity Fan Club remained active even after Risa resigned. 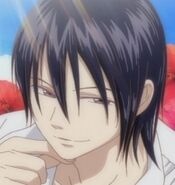 Add a photo to this gallery
Retrieved from "https://lovelycomplex.fandom.com/wiki/Kuniumi_Maitake?oldid=10034"
Community content is available under CC-BY-SA unless otherwise noted.