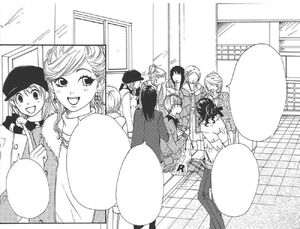 Haruka's Harem is a small group of unnamed girls that worship Haruka Fukagawa. At its known largest, Haruka's Harem contained nine girls. They appear as support characters in the original manga and anime.

They are all equally infatuated with Haruka, but have a mutual understanding that they are all just "practice girlfriends" until Risa Koizumi decides to date him. Despite this, on occasions, some of the girls question why Haruka is so in love with Risa and why he doesn't just get over her to date one of the Harem girls. When this happens, the rest of the Harem will scold the girl who questioned Haruka's actions and bring her back into the their accepted fate. They usually cycle through who gets to go out with Haruka on the weekends that he isn't actively pursuing Risa.

The girls usually stick to Haruka's side in public, but have been known to torment Risa's boyfriend, Atsushi Ōtani. They once kidnapped him while he and Risa were on a date, tied him up, painted his face to match the cat ears he was wearing (he and Risa were trying on animal ear headbands), took pictures of him for blackmail, and kept him prisoner in an equipment storage building. After Risa and Haruka rescued him, Haruka scolded the girls and told them that he would never want to win Risa's heart that way and for them to stay out of it.

The girls in the Harem all have vastly different appearances.

This section is incomplete.
You can help the Love★Com Wiki by expanding it.
Retrieved from "https://lovelycomplex.fandom.com/wiki/Haruka%27s_Harem?oldid=8564"
Community content is available under CC-BY-SA unless otherwise noted.