Chiharu Tanaka (田中 千春 Tanaka Chiharu) is a close friend of Risa Koizumi's that she first met in middle school. She is a support character in the original manga, anime, movie, and video game.

Chiharu is a very kind and shy girl who is not very outspoken, though she has been seen to get extremely violent when upset. Notably when she picked up a school desk and threw it at Suzuki after he almost willingly handed Chiharu over to another man. Chiharu is considered the smartest person of their friend group and even helped Risa Koizumi study to get into Maido Academy. Chiharu is very supportive of Risa and Atsushi Ōtani relationship, but often remains in the background letting Nobuko Ishihara take the reigns in helping them with their problems.

Like most Japanese girls, Chiharu is very short and petite. In both the anime and manga, Chiharu dons straight shoulder length hair with side fringe and only wears it in a ponytail during athletics like P.E. or swimming. She is usually seen wearing "old lady" clothing in the anime, but is quite fashionable in the manga. The way Chiharu looks is often compared to Ōtani's ex-girlfriend, Mayu Kanzaki.

In the anime, Chiharu has black hair and blue eyes. Chiharu wears a school uniform consisting of a white dress shirt, gray skirt, blue knee-high socks with white stripes, a properly fit red ribbon, and brown dress shoes. During warmer weather she wears a peach sweater vest with red stripes and a star, and in the winter she wears a peach cardigan with red stripes on the arm, red buttons, a red star, and a red ribbon.

In the manga, Chiharu has light brown hair and brown eyes. Like the others, she opts to wear casual clothing to school due to Maido Academy being uniform optional, but still wears the traditional uniform during school events. She is the only female character to not wear accessories with her school uniform in the manga.

Ryoji is Chiharu's boyfriend. They started dating during the summer of their first year of high school. Their relationship was fairly ordinary and non-complicated throughout the series, until it came to college entrance exams. Suzuki and Chiharu aimed for the same university, studying together and finally taking entrance exams together, but Suzuki failed due to him falling ill the day of the exams. This caused some strain on their relationship because Suzuki felt he wasn't smart enough for Chiharu.

This feeling was further pushed when Yowao Hosokawa told Suzuki that he was no good for Chiharu since he had failed the entrance exams, but that he (Yowao) had passed the exams and therefore was worthy of Chiharu's love. Yowao demanded that Suzuki give Chiharu to him, to which Suzuki replied with, "I'll think about it." This greatly upsets Chiharu as she wanted to be with Suzuki, not Yowao, and wanted Suzuki to know that he is worthy of her too. This frustration prompted her to throw a desk at Suzuki out of anger. Suzuki goes to Yowao with the intention of talking it out, but Ōtani's big mouth initiates a judo match between the two instead. Suzuki ultimately loses the judo match against the talented Yowao, but Chiharu tells Suzuki that he is worthy of her love and that she will wait for him to take the entrance exams again next year so they can continue going to school together.

Risa is Chiharu's longtime friend, having gone to junior high together and studied for the entrance exams into Maido Academy together. Chiharu is very supportive of everything Risa does, but fails to give any helpful advice. Rather, she is more like Risa's personal cheerleader.

Nobu and Chiharu met during their first year of high school and have been close friends ever since. Chiharu is often seen supporting Nobu's words of advice to Risa, but will take a soft-spoken initiative to calm Nobu down when she gets angry at Risa.

Ōtani and Chiharu met sometime during their first year of high school. Unbeknownst to Chiharu, Ōtani had a massive crush on her (possibly due to her remarkable resemblance to his ex). Chiharu finds it very easy to talk to Ōtani due to his small stature making him the first male she ever comfortably talked to in the series.

Nakao is Nobu's boyfriend, and Chiharu's friend through association. Nakao and Chiharu are not particularly close because of Chiharu's overwhelming fear of men, but despite this she still seems to trust Nakao and isn't overly nervous around him like she is with most other men. 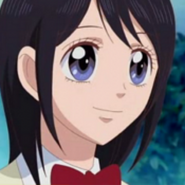 Movie
Add a photo to this gallery
Retrieved from "https://lovelycomplex.fandom.com/wiki/Chiharu_Tanaka?oldid=9166"
Community content is available under CC-BY-SA unless otherwise noted.